LONDON (Reuters) – Sterling retreated from six-week highs against the dollar on Tuesday as Prime Minister Boris Johnson stuck to his pledge to take Britain out of the European Union by Oct. 31, vowing not to seek an extension to the deadline.

He is required by a law passed this month to ask the EU for a three-month delay to Brexit if a deal is not approved by Oct. 19, but British media reports say his team are looking at ways to circumvent it and Johnson said on Monday Brexit would happen on Oct. 31, with or without a deal.

Britain’s top court will hear later in the day the government’s argument that Johnson’s decision to suspend parliament until shortly before the Brexit date was not illegal as Scottish judges concluded last week.

His opponents say the suspension was aimed at impeding parliament from preventing a no-deal Brexit, an accusation Johnson denies.

“The decisive question for the pound exchange rates remains whether or not a no-deal Brexit at the end of October is de facto off the agenda,” Commerzbank analysts told clients, adding that latest developments showed sterling’s month-long rally was not justified.

By 0800 GMT, the pound was quarter of a percent lower at $1.2398 after also losing ground on Monday. It had jumped 1.3% on Friday as investors grasped at a headline, later denied, that Johnson’s Northern Ireland allies may soften their Brexit stance.

But the currency is also being buffeted by the volatile dollar, which rose late on Monday as oil prices eased and trade tensions with Japan appeared to cool. The greenback inched to a five-day high against a basket of currencies ahead of the U.S. Federal Reserve’s policy meeting this week.

Against the euro, sterling fell 0.3% to 88.8 pence having firmed on Monday to a three-month high.

Commerzbank advised watching the options markets. Insuring against a steep pound fall still carries a sizeable premium, showing that “options traders do not exclude a major sterling bang” they added.

Two month implied sterling volatility, the contract encompassing the Brexit deadline and a possible general election, ticked up to a one-week high.

It had risen to over 15 vols in early September before tumbling last week to a 9.3 vols low, and stands now around 10.3 vols. Three-month vols with Dec. 17 expiry also remain elevated due to election risk. 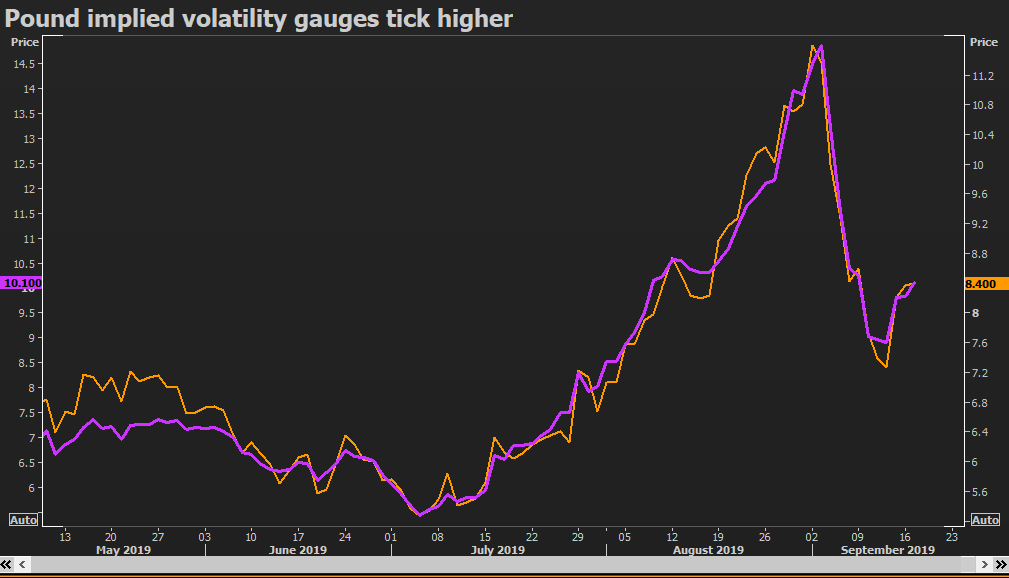