The CoT report, against conventional belief, does not represent a lagging indicator. The right interpretation of the data provided, published every Friday at 3:30 E.T., and reflecting the commitments of traders up to the prior Tuesday, offers comprehensive insights to gauge how the smart money is positioned. Large institutions and commercials tend to leave a trail of breadcrumbs along the way, and through the CoT, we can follow what their intentions are, therefore, it should be seen as a valuable resource.

Click here to view a table of the latest legacy report.

Click here to view a table of the latest disaggregated report. 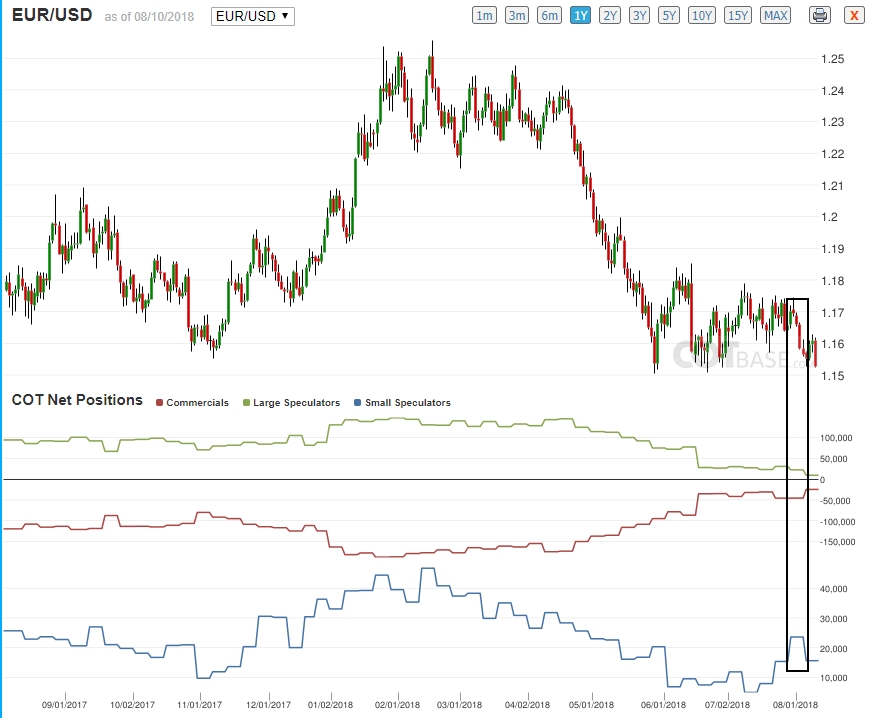 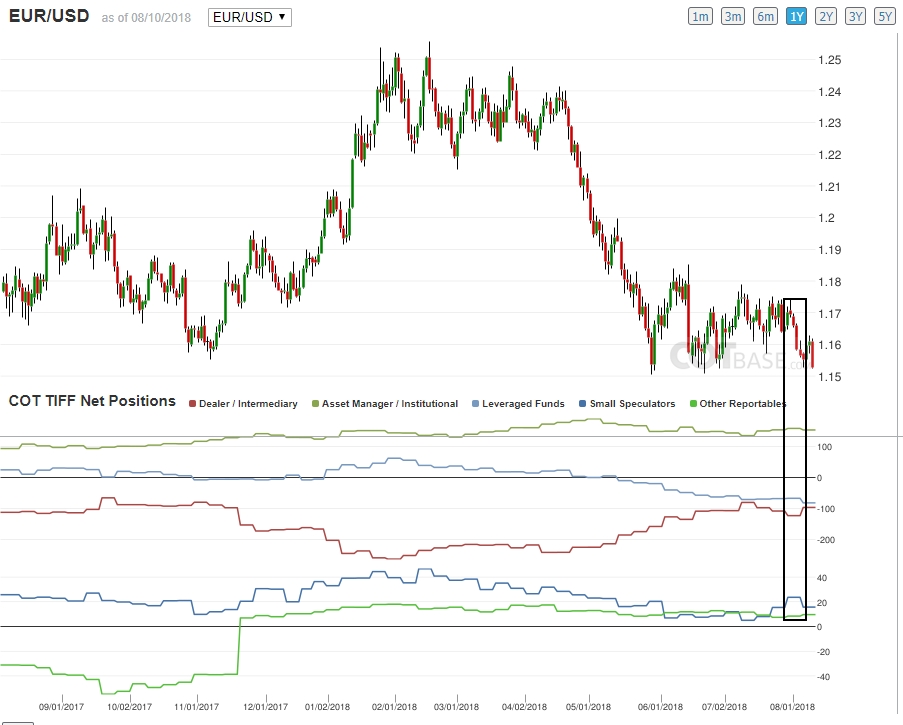 In a week in which the 6E contract saw an acceleration of its losses, open interest increased by over 6k contracts amid slightly lower volumes, which is essentially a cyclical by-product of the month of the year (August). This is a first clue for bearish continuation dynamics going forward as offers are expected to pile up defending an anticipated major area of selling interest between 1.15-1.16 on a retest.

Large specs adjusted their market exposure by adding almost 15k short contracts, getting the direction right once again, with leverage type accounts also adding aggressively into their short to the tune of 15k extra shorts. Meanwhile, total commercials saw a total increase of 20k contracts, although it was mainly due to the closing of short contracts rather than new longs (just over 6k). This suggests that commercials are expecting further declines given their tepid activity even as EUR/USD was testing a macro area sub 1.16. Note, commercials remain near neutral in its overall exposure, which allows for plenty of room for the pair to develop a fresh and potentially bearish cycle from here. This will be very much dependable on the crisis in Turkey and whether or not it has spillover effects into EM and global assets, which should keep the bid tone in risk-off proxies such as the US Dollar. If the focus were to shift back into the Central Banks’ monetary policy diveregences, the ECB and Fed should sooner rather than later starting closing the gap in rate differentials, in which case, the exchange rate at current levels presents an appealing proposition (that’s one of the reasons we are seeing asset managers with a substantial long position overall). Timing is everything. The unstretched nature of the current market positioning offers a backdrop for potentially lower levels.

Total dealer positions saw a significant increase, which is very conducive of a market that keeps painting a bullish narrative all around, while asset managers, against the recent bullish trend, barely added to their longs notwithstanding the fact that a major support area was being tested; these accounts were right to be anticipating the increasing probabilities of a potential EUR breakout sub 1.15 and probably assumed it’d be wise to wait further developments before overcommitting to the long-side as seen in recent weeks. What was interesting is that asset managers dialed up their shorts by over 6k which was impressive to say the least, as these are account types that tend to engage in well-established trends, so the bearish shift further substantiates the bearish dynamics that facilitated the breakout on Friday. Commercials and asset managers, which were the most notable buyers of Euros near bottom edges completely vanished in the last week up to Aug 7th, which allowed to exploit the downside amid weakening bid blocks. 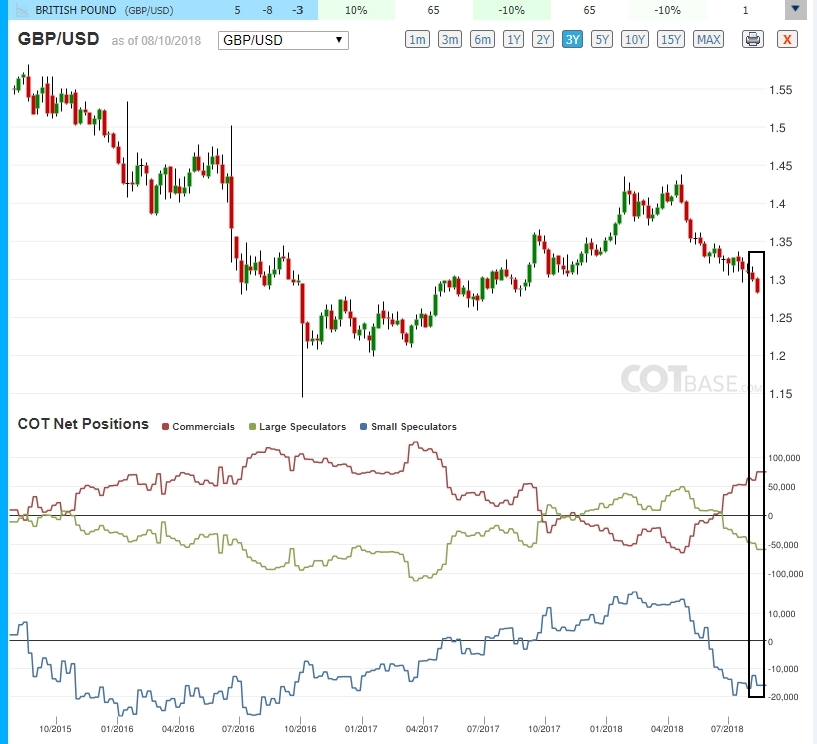 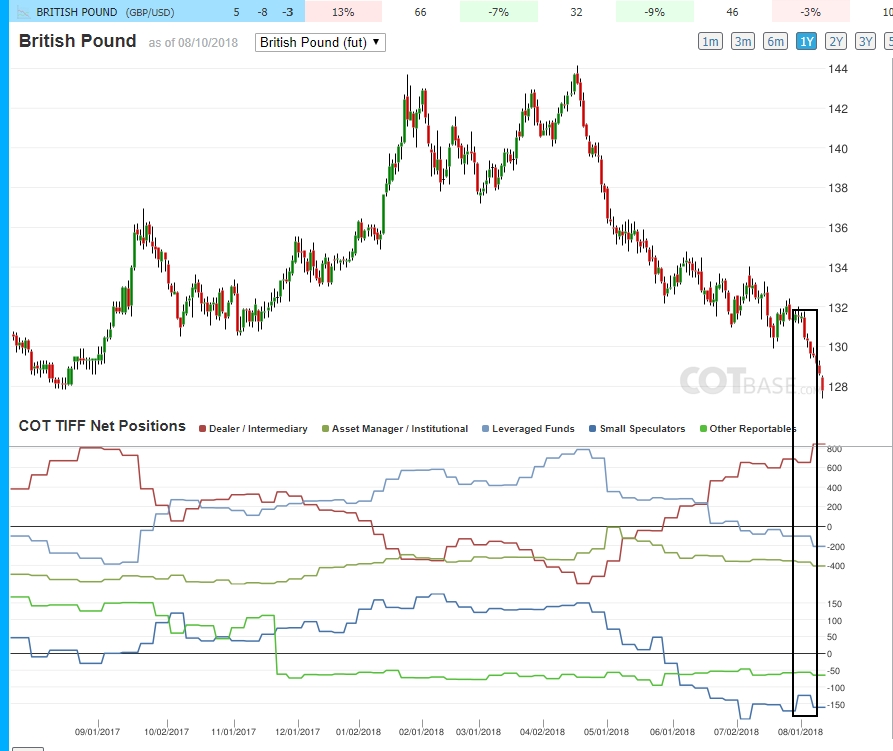 A major increase in open interest amid a downtick in total volumes for the week ending on Aug 7th. The increase in open interest was one of the largest we’ve seen since early May, which communicates that any snapback in prices towards the 1.2950-1.30 should attract major selling interest in what is seen as a developing and fairly healthy bearish trend as more positions get opened to exploit the Sterling depreciation.

Large specs were strongly committed to the downside as shown by the increase in over 20k shorts, while as many as 10k new long contracts or thereabouts were caught wrong-sided. In total, lev specs have now increased their outstanding short exposure to -58.7k, still providing plenty of room as the percentage of open interest is barely 22% of the total open interest. These account-types have reached levels of exposure as high as 45-50% during the Brexit chapter that saw the pair tests levels around 1.20. The lev accounts saw an almost identical bearish pattern, with the total positions increased by almost 10k new shorts to a total of -20k.

Looking at the total dealers, a substantial increase in long positions fits perfectly into the storyline of a bearish trend developing its course. It essentially tells us that shorts were being hedged via buy-side action to match off their books and eliminate the risks of short exposure via the products designed to their institutional clients. Lastly, the addition of shorts by asset managers in a market that was in free-fall mode speaks loud and clear of the rush by players to engage in short plays in anticipation of lower levels. This development only solidifies the solid nature of the current bearish trend with major sell-side interest on a retest of 1.2950 up to 1.31. 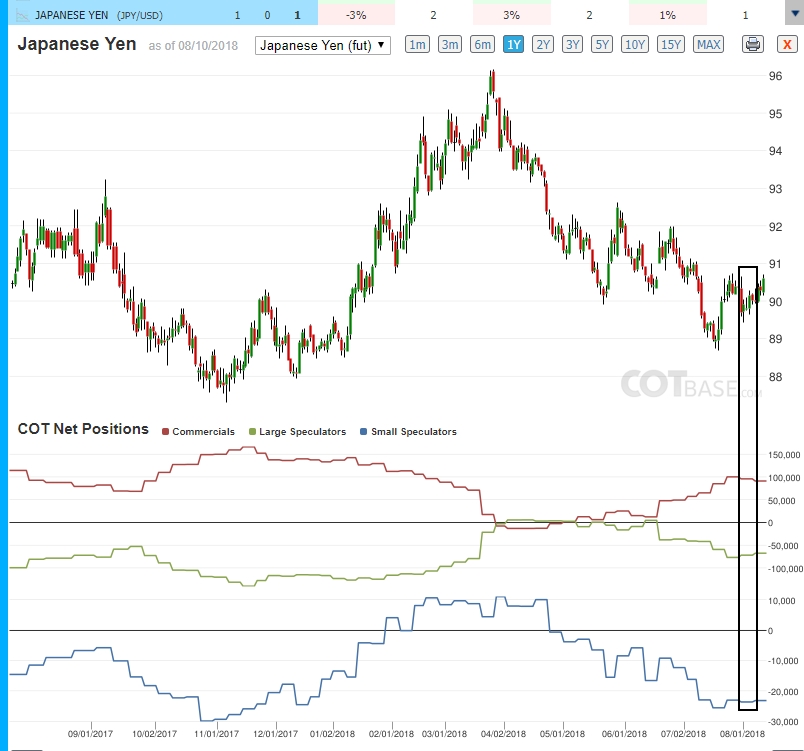 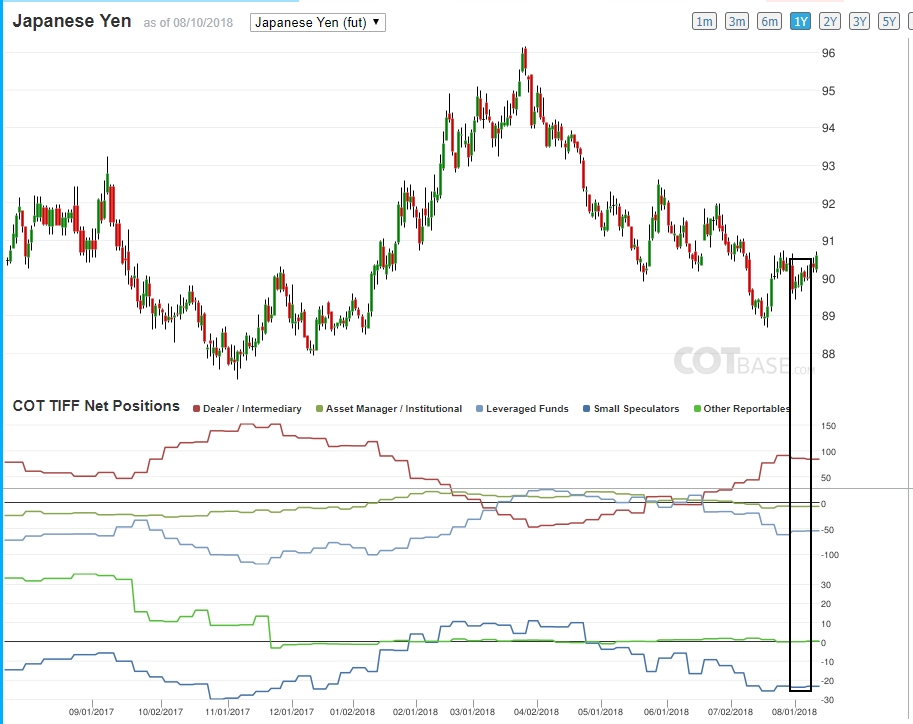 It was, once again, a week in which open interest saw a decrease, with paltry volumes overall, which is suggestive of a market holding a rather cautious stance amid the turmoil in EM, most notably China, Russia and now Turkey being at the forefront of all investors’ focus. Both long and short large specs in the 6J reduced their exposure by 2k and 6k respectively, with a similar picture seen across commercial accounts.

It’s interesting to see Yen commercial shorts not wanting to hedge on the drop seen inUSD/JPY, which gives us a clue that they’d rather be patient and wait for potentially lower levels to hedge. Keep this snippet of info in mind. With regards to total leverage accounts, the closing of open positions was dominant too. As per total dealers, nothing to see, with barely any changes, with the exact picture in asset managers. Overall, the only takeaway from the latest changes in positioning is the absence of any selling interest by short commercials in the 6J contract in a week that the Yen rose. The next reading should provide new and more clarifying clues as 110.00, a major macro support, is being re-visited during Monday, so the change in positions will be reflected. 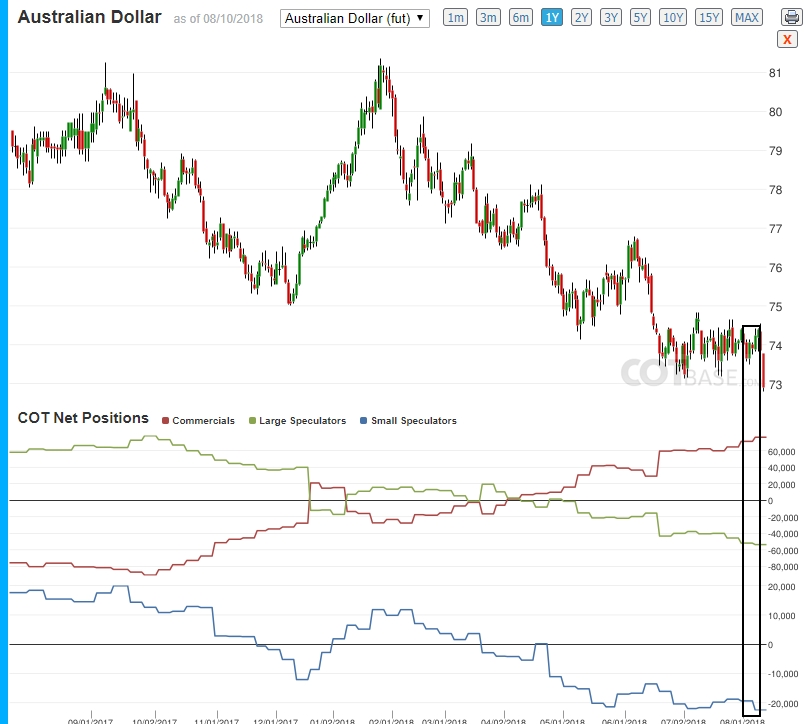 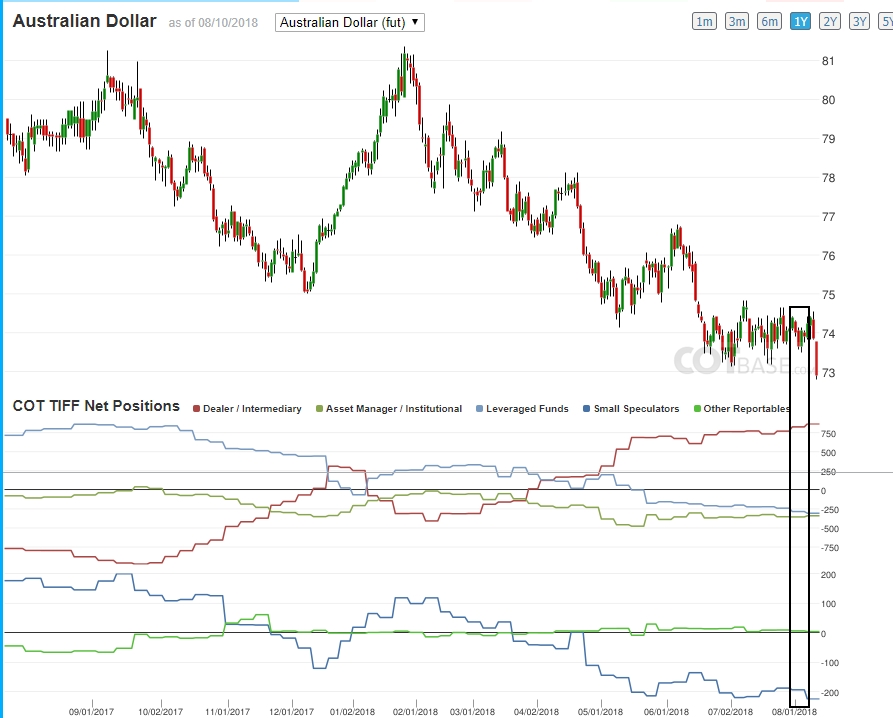 The first indication from the latest adjustment in market positioning is the absence of any new information in terms of open interest, which remained at 155k, although large spec shorts increased their bets by a ratio of 3/1, now totalling -76.2k as opposed to -73.1 the previous week. The price action during the 5-day period was rotational, with a 1c. Range testing both the lower and higher end of the range between 7350 and 7450, so what the action by large specs suggests is that the range was still being dominated by greater selling pressure on the top side. Leverage account also got fresh shorts, going from -28.4k to -30.6k.

The commercial accounts, however, increased their long net exposure in the Aussie, taking the percentage of open interest to nearly 50%, which is a very extreme level. The last time we saw this magnitude of buy-side commitment by commercials was back when the rate was exchanging hands near 70c, so there is an obvious perception that at current levels hedgers are finding it very attractive. However, for now, spurs of risk-off swings and EM turbulence, with the Aussie being the main proxy to reflect those worries, keep acting as a force too intense to revert the selling pressure. What the positioning of commercials should mean is that if the buy-side engagement continues, the slide in prices should be limited in volatility, with elongated sell-offs to find ample demand. Lastly, dealers added to their longs in a market that was mainly neutral, which if anything, is a communication of the bearish view. No changes of note in asset managers.