That’s where the Australian dollar sits this morning after falling as low as 0.7835 overnight around the time of the stock market nadir and during the period where risk assets were most offered.

It’s been a solid bounce from a level that was only `10 or 15 points above the 50% retracement of the rally from 75 cents which peaked recently above 81 cents.

That the Aussie recovered on the back of the recovery in risk appetite is certain. But back at 79 cents now it is not far below where it was before the stock market swoon really kicked off yesterday.

So the question is what’s next?

The answer to that depends very much on whether this stocks market collapse was a liquidity and volatility induced catharsis or the start of something more pernicious and long-lasting.

At the moment the safe bet is that this was part of the so-called “sell of we had to have”. But I’m not sure just yet if it was all of this same selloff.

Volatility begets volatility downside and up. So it’s too early yet to say it’s all blue sky. But the chances are high that the swoon is over medium term because whether it is the US or global economy the outlook is bright for 2018 and likely also 2019.

That backdrop is, in turn, positive for the Australian dollar as well via the linkage with commodities which should do well in this environment. But the Aussie isn’t just commodities. It’s also interest rate differentials, risk appetite, technicals and theUS dollar.

On the interest rate front, the RBA signaled yesterday that it is positive about Australia’s growth outlook but is as yet not ready to raise rates.

The RBA’s growth forecast of 3% is – by its own measure – up at the economy’s speed limit, its potential. That would usually mean that there is a chance that running the economy hot, as this type of relative speed implies, would normally bring with it inflationary pressures.

But the RBA was quick to deal with that in the governor’s statement yesterday saying in the final paragraph that “further progress in reducing unemployment and having inflation return to target is expected, although this progress is likely to be gradual”. That means the governor thinks things are looking up but he’s leaving rates on hold for a bit yet because he wants to see a sustainable shift in wages and inflation.

So the time is not yet there for the RBA to follow the Fed. That will weigh on the Aussie.

Likewise, the recognition that there is a real chance of overall policy divergence between the fed and other central banks this year has helped stem the dollar’s loses. It hasn’t exactly bounced yet. But it has stabilised.

That will weigh on the Aussie.

Risk appetite will be more circumspect for a while which is neutral for the AUD/USDwhich leaves me with the technical outlook.

That is a question of time frames.

But the daily charts are still pointing toward weakness for AUD/USD now that it is trading below both the 15 and 30 day EMA’s. Last night’s low was on the bottom of the Bollinger Band and the stochastic is in oversold territory. A break of 0.7953 might suggest a turn in the Aussie.

But while below there downside pressure toward 0.7820 50% retracement level remains likely. A break of that level would suggest a move to the 61.8% retracement and 200 day moving average at 0.7745/50. 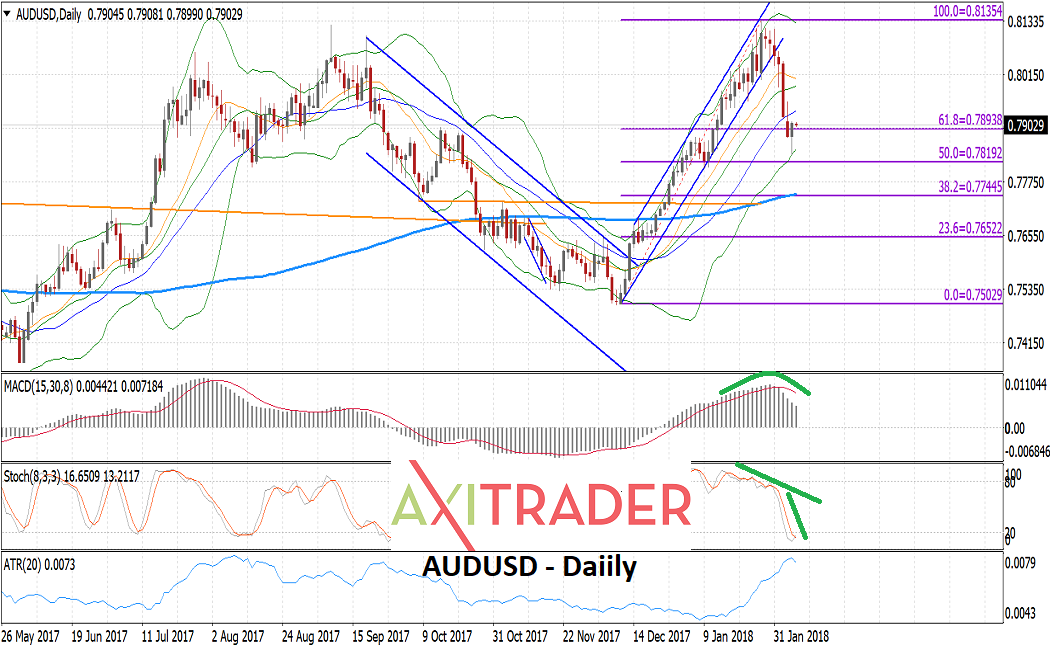 Have a great day’s trading.