It is possible, Yellen said, that the Fed may have “misspecified” its models for inflation, and “misjudged” key facts like the underlying strength of the labor market and whether inflation expectations are as stable as they seem, and central bankers need to remain open to that possibility as they decide on policy.

Still, recent low inflation was likely a reflection of factors that would fade over time and despite uncertainties, Yellen said it:

Would be imprudent to keep monetary policy on hold until inflation is back to 2%. Without further modest increases in the federal funds rate over time, there is a risk that the labor market could eventually become overheated, potentially creating an inflationary problem down the road that might be difficult to overcome without triggering a recession.

Yellen’s remarks attempt to resolve a debate that has split members of the central bank among those worried that inflation may be permanently anchored below the Fed’s 2% target because of structural changes in the global economy, and those who feel it is only a matter of time before tight labor markets lead wages and prices to rise. She did not provide a definite answer, noting that in current forecasts there was a 30 percent chance inflation could range anywhere from 1 percent to 3%, vastly different outcomes either of which could rewrite the Fed’s policy approach. But she did make clear the Fed still feels a gradual pace of rate hikes remains the base case.

The Fed, which has raised rates twice this year, last week held rates steady and released forecasts that suggest most policymakers expect to raise rates once more by year-end and three times further next year. Traders of short-term interest-rate futures see about a 76% chance of December rate hike, but are betting on only one rate hike next year. We stick to our forecast that the Fed will raise rates in December.

U.S. consumer confidence fell in September and home salesdropped to an eight-month low in August due to the impact of Hurricanes Harvey and Irma, supporting the view that the storms would hurt economic growth in the third quarter.

The Conference Board said on Tuesday its consumer confidence index declined to a reading of 119.8 this month from 120.4 in August, which was the highest reading in five months. The Commerce Department said new home sales decreased 3.4% to a seasonally adjusted annual rate of 560k units last month, which was the lowest level since December 2016. Sales were down 1.2% on a year-on-year basis in August.

The Atlanta Federal Reserve is forecasting the economy to grow at a 2.2% annualized rate in the third quarter, slowing from the April-June period’s brisk 3.0% pace.

The euro hit a fresh one-month low on Wednesday as an ongoing dollar short squeeze and reaction to the German election encouraged investors to sell European currency. We think that a further correction seems likely in the short term, but medium-term outlook remains bullish. 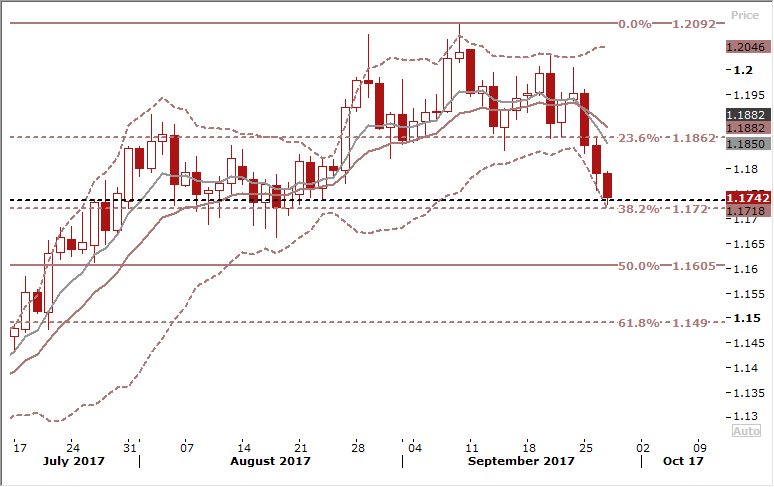 Short-term signal: Our long position was stopped and we think that further drop in the EUR/USD is likely. We have placed a new bid at 1.1610, just above the 50% fibo of 1.1119-1.2092. Bullish trend should be maintained in the long term.
Long-term outlook: Bullish