Home / General / Forex Strength and Comparison Week 46 / 2017: FXTA
In the Currency Strength table, the CAD was the strongest currency while the AUD was the weakest. There were some significant changes last week with the GBP and CHF gaining 2 points and the USD losing 3 points. The other currencies remained around the same level of last week with a maximum change in the strength of just 1 point.The CAD showed a good performance during the whole week and a very strong performance at the end of the week. The EUR and GBPshowed a steady and strong performance during the whole week.The EUR and CAD are Strong currencies and fit exactly with the current performance in the Classification and Score.
The GBP is a Neutral currency and does not fit exactly with the current performance in the Classification and Score. However, being a Neutral currency it may offer some good opportunities against the Weak currencies. 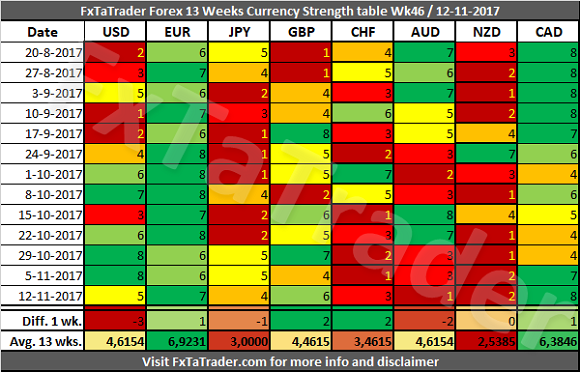 When looking at the Average 13 wks. Score we can see the currencies grouped together according to their classification.
There may be some doubt and in that case it could be a currency that will change its classification in the coming weeks. There are no such currencies at the moment.

This week we take a look at the Classification changes. Based on the performance from September and before the top on October 15 seemed more like a correction coming from a low Score of 2 on October 1. The currency remained strong because it recovered fast.
However, after that top it made a dive for the second time and to the lowest Score of 1. With the current low performance, it has become a Neutral currency coming from being a Strong currency.
The CHF is a currency that remains most of the time in the middle of the range. Last week it recovered and gained 2 points compared to the previous week. However, the Classification calculates with the last 13 weeks and based on that this currency has become a Weak currency coming from being Neutral.Below you can see the Weekly Currency Score Chart with the 6 months’ data as a reference. 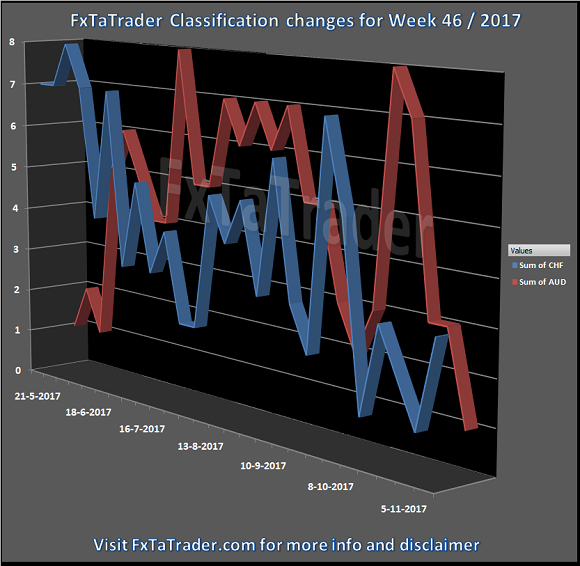 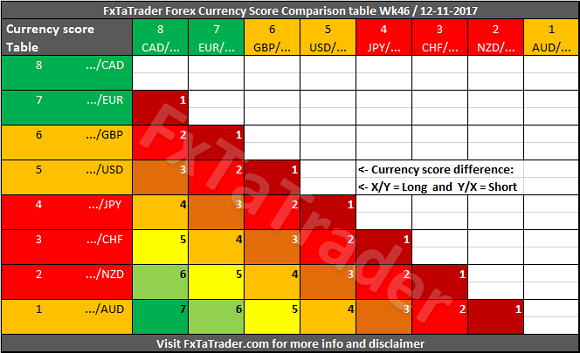 The additional value of this table compared to the Currency Score table is that the Comparison Table compares the strength between the currencies of each pair. By subtracting the strength of the weaker currency from the stronger currency we have a way to compare each pair combination.
The comparison table provides a way to compare currencies from a longer-term perspective of 13 weeks and also simultaneously taking the current trend into account. By coloring the currencies in the X and Y axis according to their Classification we can show what the best combinations are.

For going short the same analysis can be done and the following currencies seem to fit best:
AUD, NZD and CHF.
These are Weak or Neutral currencies from a longer term perspective.

Currencies with a high deviation seem less interesting to trade because they are less predictable. A good example now is/are e.g. the:.
AUD.

DISCLAIMER: The articles are my personal opinion, not recommendations, FX trading is risky and not suitable for everyone. The content is for educational purposes only and is aimed solely for the use by ‘experienced’ traders in the FOREX market as the contents are intended to be understood by professional users who are fully aware of the inherent risks in forex trading. The content is for ‘Forex Trading Journal’ purpose only. Nothing should be construed as a recommendation to purchase any financial instruments. The choice and risk are always yours. Thank you.