US payrolls numbers disappointed a little on Friday and China’s trade numbers over the weekend demonstrated what impact the trade war is having.

Overview: Over Under Sideways Down

Major markets – across bonds, stocks and currencies – traded essentially sideways with limited volatility on Friday, despite the double whammy of a US payrolls report and speech from Fed chair Jay Powell. Together they left markets comfortable in expecting the Fed to cut the Funds rate by 25bps next week, no more or no less. Prior to the US day, China announced a further easing in monetary policy via a  half percentage point cut to the Reserve Requirement Ratio (RRR) to 13%. Its August FX reserves data published on Saturday suggest that the fall in the Yuan last month, from 6.88 to 7.15 against the USD, was not the product of particularly strong capital outflows. China’s August trade numbers released Sunday show exports growth weakening further, with no signs of ‘front loading’ in either exports or imports in front of the further ratcheting up of tariffs from Sept 1st.

US August payrolls grew by 130k, well below the 160k expected and slower still in so far as Census-related hiring boosted overall payrolls by 28k. Private sector hiring was 96k – below the rises seen in both June and July. The unemployment rate held steady at 3.7% while average hourly earnings rose by 0.4%, above the 0.3% consensus with the year-on-year increase now out at 3.2%, down from an (upward revised) 3.3% in July but still above the 3.0% consensus. The annualised rate for the past three months is now running above 4%.

Speaking after the August payroll report and prior to the US market close, Fed chair Powell pushed back against recession talk and described the labour market as being in a ‘good place’.  He said ‘The most likely outlook for our economy remains a favourable one with moderate growth, a strong labour market and inflation moving back up close to our 2% goal’ but added ‘all that said, there are significant risks and we’ve been monitoring those, including slowing global growth, uncertainty around trade policy, and also persistently low inflation.’

Canada’s labour market data showed an outsized 81.1k jump in employment (with a full/part time split of 23.8/57.2k).  The unemployment rate was unchanged at 5.7% as expected while hourly wages growth fell back to 3.8% from 4.5% (4.5% expected). Collectively the numbers play to the Bank of Canada remaining quite comfortably on hold for the time being, which indeed was the message they imparted out of their latest policy meeting last week.

Other data to note Friday included 0.6% fall in German industrial production in July, below the +0.4% consensus but flagged by the previous day’s chronically weak new orders data.  The second estimate of Eurozone Q2 GDP came in unchanged at 0.2% on the quarter though the year-on-year rise is now 1.2% up from 1.1% first reported.

After the APAC close on Friday, China announced a 0.5% cut to RRR for all banks effective September 16th, with a further one percentage point reduction in two stages for some city commercial banks (from Oct 15th and November 15th). The latter is seen aimed at enabling banks to step up lending to the corporate sector rather than encourage increased property related lending.  The moves free up some Y900bn (~$126bn) worth of liquidity and constitutes more targeted and prudent easing rather than something more aggressive.

On Sunday, China August trade data showed a smaller than expected surplus in USD terms of $34.48bn ($44.3bn consensus) due to weaker than expected exports, now-1% yr/yr after 3.3% in July and 2.2% expected. Import growth remained negative at -5.6% unchanged from July and better than the -6.4% consensus. So not signs of US firms ‘front loading’ imports from China to escape the new tariffs from Sept 1st.  The data plays to the view that assuming no progress on trade when the US and China meet again in October, further weakening in the CNY is likely thereafter (key to NAB’s weaker AUD view later this year).

China’s August FX reserves, reported on Saturday, rose by $3.48bn to $3.107tn, despite what should have been negative valuation mark-to-markets given the USD was overall about 0.5% stronger on the month and EUR/USD 1% weaker. The rise will likely have reflected strong valuation gains on bond holdings (e.g. US 2-year note yields fell from 1.87% to 1.5%).  Nevertheless the data suggests little or no net capital outflows during the month (SAFE say they were roughly balanced) even though USD/CNY rose from about 6.88 at the start of August to 7.15 by month-end. As such, it suggests that CNY depreciation to date has been more a product of markets marking USD/CNY higher and this being tolerated by the PBoC, rather than strong capital outflows that the central bank had to at least partially resist.

Locally, the profile and interview with RBA Governor Lowe by Peter Hartcher in the Sydney Morning Herald’s Good Weekend magazine suggests that  the RBA is closer to conceding that rates will get down to, or close to, zero than he has so far been willing to admit in public; ditto the likelihood of entering the world of unconventional policy.  Key quotes from Hartcher, but which don’t directly quote Dr. Lowe are:

“Lowe fears that our time is up. He’s using his power over interest rates to pull Australia back from the brink. But official rates are nearing zero per cent. Lowe is preparing the way for the eventuality that they hit zero and need to go further, into the weird world of “unconventional” measures, a world Australia has never entered.”

“Lowe would like some help navigating through this brave new world from Frydenberg and PM Scott Morrison. He’s frustrated that they’re not offering enough. An epic clash could be looming, testing the credibility and the powers of the Morrison government on the one hand and those of Lowe’s RBA on the other.”

US bond markets were similarly subdued after the sharp rise in yields on Thursday, 2s closing +1bp at 1.54% and 10s unchanged at 1.56%.

In FX, the DXY dollar index traded flat to end the day at 98.4 and about 0.5% lower on the week. Commodity currencies were mostly winners with AUD, NZD, CAD (and SEK) all up by between 0,.4% and 0.5%. The Euro and Yen were little moved while Sterling gave back about 0.4% of its strong intra-week gains, the former after parliamentary developments were seen to have significantly reduced the risk of a no-deal Brexit on October 31st.

Locally, July housing finance is today (NAB, consensus +1.5% for the number of new loans to owner-occupiers) and the August NAB business survey on Tuesday.

The ECB is the week’s international highlight on Thursday, where we see risk for some disappointment if the Governing Council fails to announce a new QE bond market programme alongside an expected cut to the Deposit Rates (where the consensus is for -10bps NAB sees a good chance of -20bp) together with some form of tiering in an effort protect banks’ profitability.

Ahead of the FOMC next week, retail sales and the preliminary university of Michigan consumer sentiment reading, both on Friday and CPI on Wednesday, are the highlights. FOMC official are now in pre-meeting purdah.

The black comedy that is UK politics and Brexit will continue following the royal assent today of the bill that legally blocks a no-deal Brexit on October 31st.  ‘Informed’ media reports Friday were that a general election will come after, not before, October 31st. 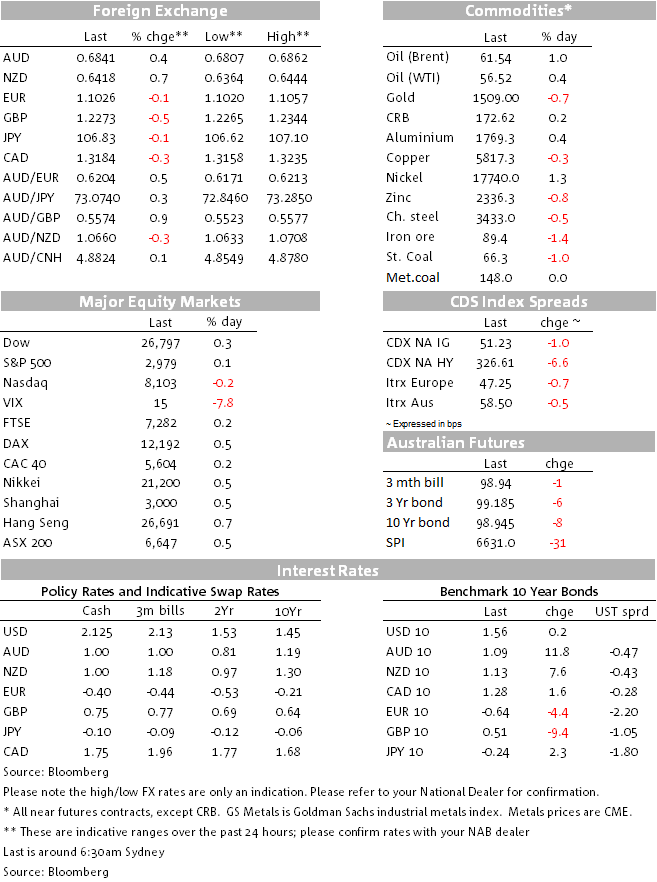 Ray Attrill is Head of FX Strategy within the Fixed income, Currencies and Commodities division of National Australia Bank.

In this role, he advises the bank’s dealing rooms and institutional and corporate clients on developments in global foreign exchange markets.

Ray has 30 years experience as an economist and market strategist, obtained in roles working in London, Sydney and New York. Prior to joining NAB in 2012, he held a similar role at BNP Paribas, based in New York.

He previously amassed considerable experience in research and strategy, being a joint founding partner for 4CAST limited, a leading independent economic and financial market research company. Prior to that, he worked for many years in senior roles at MMS International, also a leading on-line market research provider.

He holds both Master and Bachelor of Science degrees in economics from the London School of Economics.