On Wednesday we have the Federal Reserve’s second-to-lastmonetary policy announcement of the year and while no changes are expected, they are widely expected to set the stage for a year-end rate hike. The U.S. dollar is trading firmly against most of the major currencies ahead of this key event and if the Fed is sufficiently hawkish, we will see USD/JPY above 114 and possibly even near 115. Fed-fund futures show the market pricing in 0% chance of tightening in November and an 85% chance of a hike in December. This means the Fed needs to be unambiguously hawkish in order to avoid a sell-off in the dollar. If anyone dissents and favors an immediate tightening, the dollar will rise with USD/JPY taking aim at 115 – if there are 2 or more dissents. Taking a look at the table below, there has been widespread improvements in the U.S. economy since the last Fed meeting and with the progress being made on tax reform and stocks hovering at or near record highs, there’s plenty of reasons to justify a hike. Consumer spendingand consumer confidence is up, average hourly earnings increased significantly in September, inflation increased with improvements seen in manufacturing and service-sector activity.

For all of these reasons, we believe that the dollar will rise into and on the back of the FOMC rate decision. Unlike last month’s meeting when a press conference followed the rate decision, this time we only have the FOMC statement. But that can still be enough to excite dollar bulls. We’re looking for a move up to 114.50 on the back of FOMC but if there are a number of hawkish dissents, we may even see the pair break 115. There’s no question that investors are bullish dollars ahead of this event so in the unlikely chance that the Fed raises fresh concerns, giving investors reason to believe that next month’s hike will be a dovish one, USD/JPY will fall quickly and aggressively and the unwind could take the pair as low as 112 in the hours that follow. The Bank of Japan also left policy steady Monday night, adding pressure on the Japanese yen. 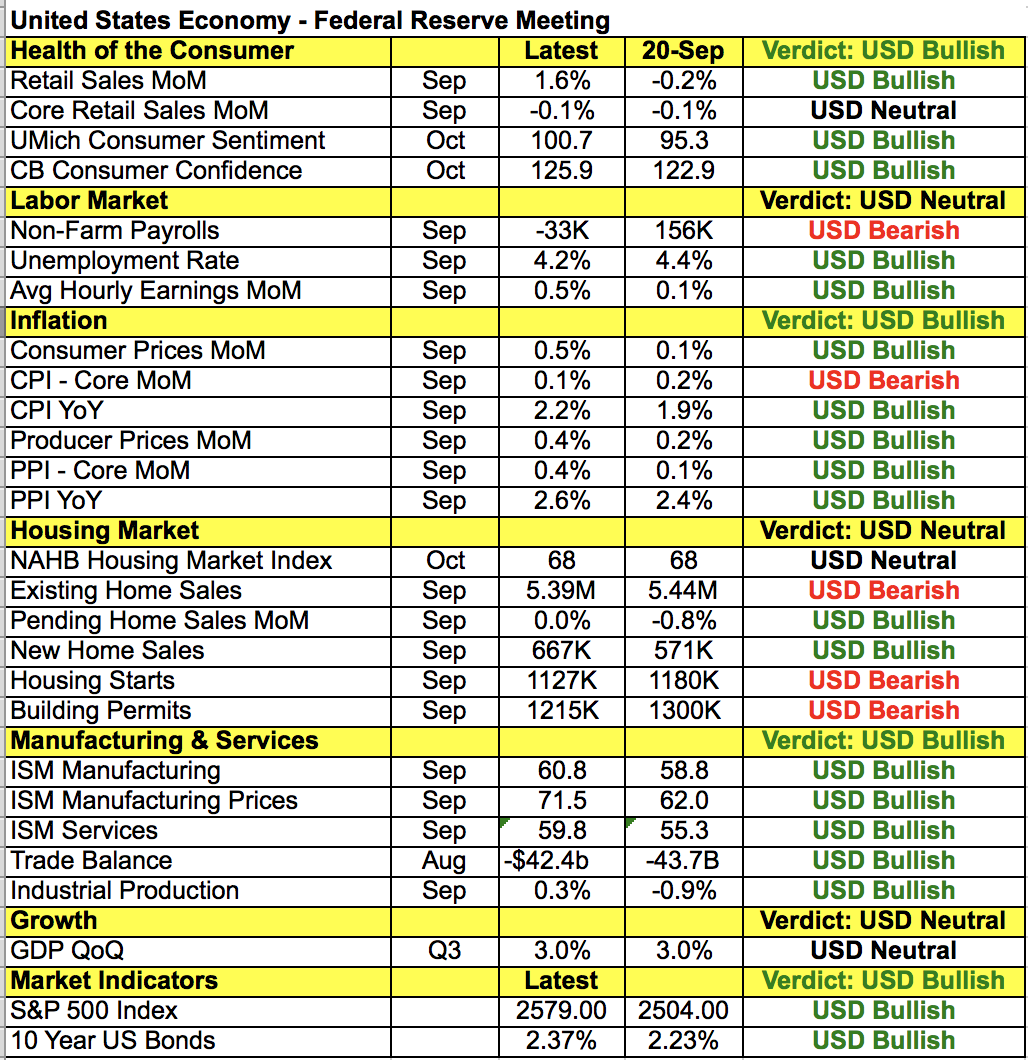 The commodity currencies were hit the hardest bydollar strength with the Canadian dollar leading the losses.Weaker-than-expected GDP growth along with dovish comments from the Bank of Canada extended the currency’s slide. Economists were looking for 0.1% GDP growth in August but instead, the economy contracted by -0.1%. BoC Governor Poloz said that while the sources of Canadian growth has broadened, he plans to be cautious with rate adjustments because there are signs of slack in the labor market and as they are in a crucial spot in the economic cycle due to the high level of household debt, they do not want to nip the recovery in the bud by raising interest rates again too soon. They also feel that the economy is primed and ready for a new capacity phase and they don’t want to threaten the opportunity by tightening prematurely. Although USD/CAD has enjoyed a strong rally, we believe that the move will extend to 1.2950 and possibly 1.30 before it stalls. The New Zealand dollar had initially been trading poorly against USD but turned around completely after a strongemployment report. Not only did job growth rise 2 times more than expected but the unemployment rate dropped to an 8-year low of 4.6%. What made the report even more encouraging was the uptick in the participation rate, which made this one of the most unambiguously positive New Zealand economic reports released in sometime. Although the report is backwards looking it should be significant enough to carve out a near-term bottom for NZD/USD above 68 cents. We now expect the pair to drift up to 70 cents. TheAustralian dollar, on the other hand, remained weak with private-sector credit and new-home sales falling short of expectations.

Unlike the commodity currencies, euro and sterlingoutperformed the greenback. While Spain’s political troubles continue, investors were encouraged by stronger third-quarter GDP growth. The Eurozone economy expanded by 0.6% in Q3 with this growth driving the year-over-year rate to 2.5%, the highest level in more than 6 years. This report overshadowed the slowdown in CPI growth and kept EUR/USD firmly above 1.16. Sterling on the other hand is supported by the prospect of hawkish comments from the Bank of England on Thursday